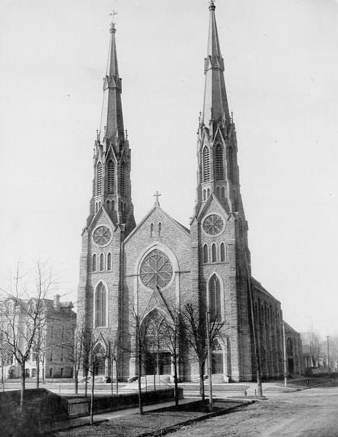 Sunday, June 28, 1885 dawned bright with promise here in Peoria, Illinois. This day was to be a very special day for the Catholics living not only in Peoria County but many surrounding counties as well. Although it was indeed a Catholic day, the entire city and county of Peoria would participate. Some of them would just come for the exciting marching bands and the pageantry of the parade, but to many it was a religiously important day as well.

The excitement centered around the magnificent, breath taking beauty of the new Saint Mary’s Cathedral that was to be erected on Madison and Green Streets in downtown Peoria, Illinois. What Peorian, returning home has not felt the swell of excitement crossing the bridge to downtown Peoria? The sight of Peoria after a long auto trip is exciting enough, but over to the right, its two giant twin spires bathed in light, is the magnificent Saint Mary’s Cathedral. That landmark has been there throughout the years welcoming folks home.

Today would be the setting of the cornerstone for this great church and thousands would be here in town to witness the pomp and ceremony. Casper Mehler was authorized to begin the drawings of the plans for the church on April 22, 1894. Once they were completed the contractor, Mathias Schnell took over and the first stone was laid on May 15, 1884. Mr. Schnell was from Rock Island, Illinois, but most of the workers from the church were from this area.

June 28, 1895 was picked as the day when the cornerstone would be installed, even though considerable construction had already been completed. Folks, congregations, organizations, church leaders, and organized societies were invited to attend. People began coming into the city by every means of transportation available in 1885. The local folks made up welcoming committees and met the visitors at the train depot, escorting them to their own homes, hotels, inns and churches throughout the city.

Early on June 28, 1885, people from all over the state came together downtown to form the gigantic parade that would form up around the courthouse. Three of the largest and best bands in the state would lead the parade, followed by smaller bands and marching societies. Some of them were very large, including Knights of St. George, the Irish Hibernians, temperance groups and dozens of brightly dressed, exuberant groups. Spencer’s band, a very famous band, entertained as the groups formed and would also march in the parade.

By two that afternoon, clouds rolled in and a light drizzle brought out colorful umbrellas, but the clouds soon passed. The Grand Marshal, Honorable Edward Spellman, signaled all was ready and the front band struck up a joyous piece and off they stepped up Adams, then up Main and over to Madison where they crowded up and around Green Street to the Cathedral. Thousands lined the parade route and then fell in behind the marchers as they all headed for the ceremonies. This certainly was an event open to the entire town and many felt pride along with the Catholics. Bishop John Lancaster Spalding made his way to the platform erected near the cornerstone and looked out at the huge, smiling crowd. He held up his hands and then welcomed everyone. The bishop then made his way to the altar with several priest to bless the cross. The bishop wore purple with a white rochet, while the priests wore white. It was a solemn occasion, but the happiness was evident in the faces of the crowd and the participants.

The contingent then made its way to the large cornerstone where the blessing of the foundation and the stone took place. A litany to the saints was spoken as the ceremonies ended. The bishop then spoke to the people gathered there at the great church.

The bishop spoke for several minutes about how the church had come about and invited everyone to keep the church alive and open to everyone. “This church shall be the center of light and power and unity for this whole diocese.” He then spoke elegantly about the City of Peoria, Illinois. “No man loves this city more than I do or is prouder of its present position, or hopeful for its future. There is no fairer site for a city in this country.” He then called upon pastors and people of other denominations to help support the building.

Bishop Spalding went on to tell the assemblage that he was certain that Peoria area’s population would be as many as 100,000 in the near future and that “This church will be built solidly, symbolizing the power and enduring life of the religion given to man by Jesus Christ.”
Click on the boxes below to read more details.

Placed within the cornerstone, written in Latin was the history of the diocese here in the Peoria area. It included several other counties when it was founded by Pope Pius 1X in 1876. At that time there were 33 priests and 70 churches. By 1881 it had grown considerably and by 1885, there were 160 churches, 109 priests and several institutes, schools and academies.

Also placed within the cornerstone are several local newspapers, including the Transcript and a German paper as well. A list containing all of the members of the church in the diocese was included along with all of the priests names and churches. Several coins dated 1885 were included inside a small box.The building was to be in the Gothic Style and dominate the area. The two spires climb two hundred feet from the sidewalk and the towers are massive, reaching a height of 76 feet. Fourteen by twenty-eight foot massive doors would adorn the main part of the church, which would be 85 by 76 feet in dimension. Since that glorious day the mighty Saint Mary Cathedral has been a beacon to visitors and the symbol of a city that has always been a wonderful place to raise a family. The church, because of the stately trees and the park like setting is even more beautiful than it was way back there in 1885.

When Bishop Spalding arrived here in Peoria early in 1877, he had a small, grayish, one-story church, located at Bryant and Jefferson. Almost from the very first day, Bishop Spalding told his parishioners that he had a vision for Peoria, for this diocese and his church. The holy man chose some property on Madison and Green for his new church. He chose this land because it was said to have been the first mission for LaSalle and Marquette. It was also very close to the first high mass that was ever said here in Peoria, November 21, 1698.

The bishop spent $20,000 for the property that he wanted, a hefty some in those days. By now the bishop’s plans had become a dream of his followers and by 1894 that dream was about to come true. Ground was broken for Saint Mary’s Cathedral on 4-22-1885. Just a short month later, May 15, 1885 the corner stone was laid amid a wonderful celebration, which you already know about.

Amid pomp and ceremony and marching bands, the Cathedral was once again the center of a celebration. After almost four years of work and an expenditure of almost $150,000.00 the mighty church was ready to open its doors to the people. It was May 15, 1889 when people gathered from far and wide to be part of history. Thousands gathered, both Catholic and just plain Peorians who knew a significant event when they saw one.

Once the ceremonies began they would include two Archbishops, 80 priests and 40 altar boys. The solemn high mass was led by Bishop Spalding in purple and gold surrounded by the white clad priests. The organ was played by widely known Gerald R. Franks, accompanied by a huge chorus of melodic voices.

Reverend Henning gave a rousing two-hour sermon and never once even mentioned the Cathedral of Saint Mary.
Why? Only the reverend knew the answer to that question and no one was asking.

In the 1930’s a church wide renovation was done to lighten the interior. Two Fluer-de-lis were installed, one for Joliet and one for Marquette. Again in 1953 the sound system was revised, and lighter, warmer paint was used for the interiors. Another huge crowd showed up on August 14, 1988 when the church was rededicated.

Although the Church has fallen on bad times, considering that in 1981 it was the epicenter for 238,000 Catholics located in 212 parishes, it is still a beacon. In my view it is no longer just a Catholic Church, but more of a symbol, a familiar sight to all of us. It has stood there in its mighty glory since 1885, may it stand another thousand years.

Mother Teresa, the most famous, pious woman the world has ever known, well, the modern world that is, was here in Peoria, Illinois in 1960. She came to spread her word and speak before a Catholic woman’s group. Her message is simple, “take care of the poorest of the poor.”

Mother Teresa, MC, that stands for Missionary of Charity was also here December 10, 1995. She came to thank the Sisters of Saint Francis for taking care of one of her nuns. There are at least six of Mother Teresa’s nuns here in Peoria, taking care of the poor out of Saint Mary’s Cathedral. People flocked around her and although it was a very cold day, Mother Teresa wore her famous sandals known to the world.

While here she told her followers that “I am a poor woman that prays.” She went on to say that “God had not called us to be successful, but to be helpful.”

Peoria has a magnificent artist here in town, although he is from Metamora as a boy. He is Lonnie Stewart and he has his studios on Water Street. He is truly famous for his sculptures and portrait paintings. At any one time his art is being viewed around the world. He traveled to Calcutta to meet with Mother Teresa, who was in a hospital at that time. He completed a portrait of her, and began a six-foot
sculpture of the famous lady.

Mr. Stewart said of Mother Teresa, “She is not a tiny woman and I noticed that she had long arms and large hands.” He said of his work, “Notice that she has one foot in front of the other and she is looking over your head. I wanted her to be communicating with God.”

On November 29, 1998, a large crowd including six nuns from the Ministry of Charity crowded around the still hooded statue of Mother Teresa. They were anxiously waiting for their first glimpse of the work of Lonnie Stewart. After the appropriate speeches the moment arrived and once the cloth was dropped, oohs and aahs and applause rang out in appreciation. The work is located to the left of Saint Mary’s Cathedral, certainly the most appropriate site in Peoria.

Present among the well-wishers was Cilla Marc, wife of Charles Marc, the man that had financed the entire work and site erection. All seven children of the couple were in attendance as well. On the right hand side of the base of the work there is an inscription. Dedicated to the memory of Charles Marc. Mr. Marc died of cancer in 1997. When he met with Father Meyer it was suggested that this statute of Mother Teresa would be a wonderful remembrance. And so it was and will be for centuries to come.

Editor’s Note: Norm welcomes your comments and you can also e-mail him: